"Kelly Ripa" is the first posting to my Comedy Section in the Reading Room. SureFoot Helms sends me reports of his hilarious, out-rageous and impeccable cases. He's convinced that Kelly Ripa is really part alien i.e. Borg. Oh well ... read it an make up your own mind. 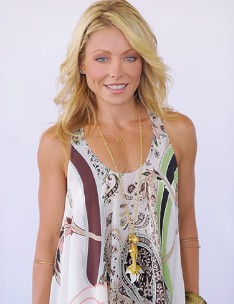 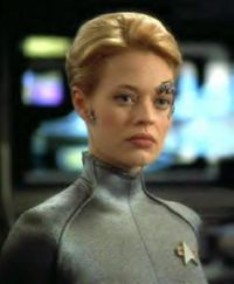 Yes, I know the truth. Kelly Ripa is really Regis Philbin’s long lost daughter! My research is impeccable and totally convincing. Here is what I found. Firstly no one but Kelly can match or even come close to Regis’ wit, but along came Kelly who simply breezed into the chair next to the master on the hit talk show "Live with Regis and Kelly!" Not convinced … well consider their statures … they are close in height and Kelly also shares some of his other genetics … consider the similarities in their chests! Okay … this is beginning to look better, but how could such a thing have occurred?

Now, things get really interesting. My secret research shows that Regis was abducted by an alien. The abductor was none other than Seven of Nine of Star Trek: Voyager fame. Yes … you read it right … she is a real alien who played the part as a deception. Her “human name” is Jeri Ryan but don’t be fooled. She is a really part Borg and her identity and age is part of the cover-up. She is really much older than her forged birth certificate indicates, supposedly born on Feb. 22, 1968.

Yes, Regis was walking along a on a snowy night in early January 1970 and Seven of Nine beamed him aboard her star ship. She forced him into making love with her … the poor guy … I should be so lucky. Regis was beamed by some kind of radiation and lost all memory of the event but it sometimes kicks in and causes miss fires such as when he tries to “dial” phone numbers on the show.

Okay … but what about Jeri Ryan and Kelly … what do they share in common? Well both use the same kind of hair coloring and work in the same business. Interesting … isn’t it? Well … late in 1970 Seven of Nine dropped the baby Kelly off at a orphanage. This is where Esther and Joseph (Kelly’s so-called human parents) picked her up. But it would be of no use to interview them since Seven of Nine “beamed” everyone and destroyed the records. Also DNA testing will not work since Kelly has a cybernetic implant that scatters biological info should a paternity test be done. In fact the device makes it look as if Esther and Joseph are her biological parents. These Borgs are clever, indeed. Well … the aliens are amongst us and Kelly Ripa is a hybrid. How else could she be so incredibly talented? I rest my case.

Another mystery has been solved by Sure-Foot Helms. I would be happy to be of future service but I don’t work cheap!